Are you after a new pole? Maybe you have only had 13m poles but have now decided to upgrade?

The pole market is always changing. Manufacturers bring out new poles every few years but there are a few fishing poles that have been around for years that are always talked about as being one of the best fishing poles on the market.

In this article, I will go through some of the very best poles that have been released in 2021 and some older poles that people still rate as the best fishing poles. I will try and mention a rough price next to each one but if you are after the most expensive fishing poles then I have written an article on this here. Price doesn’t always mean it’s the best, so in this article, I will try and list 16m poles to suit each budget. 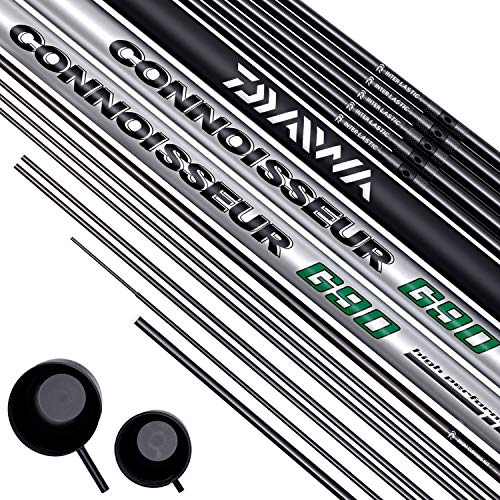 First on our list of best fishing poles at 16m is the G90. This pole was first released in 1019 but is one that a lot of the top-match anglers use.

Kristian Jones recently did a great video discussing why this was his pole choice for commercial fisheries. He isn’t sponsored by Daiwa but his reasons for choosing this as his go-to 16m pole were really good. He said that it was cheaper than some of the rivals and that left him money in his budget to get all the top kits he needed. It’s also easier than some to get spares and the Preston Innovations top kits also fit this pole – double check before you order but I heard they are made on the same mandrel.

You can check out a video here of Will Raison discussing the pole when it was launched and he really is one of the top anglers of all time.

It is also a pole a few of my friends have and for the price, you really do get an amazing piece of kit.

This is in the same price bracket as the G90. When I went to my local pole alley to test out the X70 as it’s one I want to purchase the guy in the shop asked why I hadn’t tried the G90. My answer was that I just like the Preston stuff a bit more and there was no real reason for me to not consider the G90.

This has been featured in my Superium range comparison post and in my most expensive fishing poles article, so for that reason, I won’t talk too much about it here, however, it’s not one that I could leave out either as it’s definitely one of the best fishing poles available. People have been really impressed with just how stiff it is as 16m but it does come with a £3000 price tag which is over £1000 more than the X70 above.

I won’t go on about this pole too much as it’s one I have already discussed in my most expensive pole articles. However, it’s not one I could leave out of this list as it is one of the best 16m poles on the market today.

This is Matrix’s flagship pole that has been around since 2019 when it was released. If you watch Jamie Hughes on YouTube you will see that this is his pole of choice. It’s not a cheap pole as you are looking at paying over £3,000 but it’s one that should definitely be on your shortlist.

Although Prestons Response poles have been replaced with the Superium range you should still look a the XS Response poles. Theres a chance that these have dropped in price as people might be selling these to upgrade.

These fishing poles only came out in late 2018 which isn’t all that long ago when it comes to the pole market as some of the MAP poles have been around a lot longer without them upgrading the range. The XS90 is the flagship pole of the Response range.

You are probably looking at about £2600 for a new one of these but I couldn’t find any for sale online and there was actually none on ebay when I searched. It might be worth trying one of the second-hand tackle Facebook groups if you want to get yourself a bargain.

Map poles get talked about all the time on Facebook groups. People have said that spares are harder to get hold of since the pandemic, but I think that can be said for a lot of the brands that are not made in the UK.

This is Maps flagship pole and was Andy May’s pole of choice before he moved to Preston.

You will be looking at paying over £3500 for this pole but it’s definitely one of the best fishing poles out there. If you have one of the older map 3G poles in the range then your top kits will work with the 1001 pole.

A fantastic pole that is used by 5-time world champion Alan Scotthorne who helped with the development of this pole. It’s a very slim and very light pole which is why it made it onto this list. I haven’t managed to have a hold of one at any of the pole alleys in your local tackle shop.

What to look for in the best 16m fishing poles

Now, most of these poles will come with a lot of kit as standard such as a cupping kit, a range of top kits, and a nice pole holdall. However, there are certain things you may want to consider.

Are you going to fish a lot of matches?

The weight of the pole

Some of these poles will be a lot lighter than others. You need to have a think about how often you will actually be using these at the full length of 16m

If you don’t look after your money then I would definitely recommend having a look at Facebook groups as there really are some bargains to be had.

I hope the above list of best fishing poles at 16m was of use to you. There was a lot more that could have been added but I wanted to feature the ones at the higher end of the market and the ones most brands class as their flagship poles. I can’t pick just one out as being the best pole as what I would say is my favourite would be totally different from another angler.